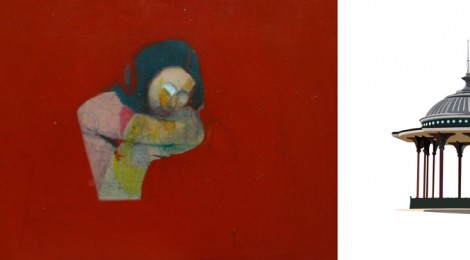 The concept of conscious and unconscious memory is a field of research, observation and creation of the works for all the artists.

Alexia Karavela born in Athens, depicts images of strangers, based on photographs found randomly, using markers and tipp-ex. The usage of draft material is inverse to the importance of the valuable memories of an atmosphere of post war Greece that ended up in trash.

He is known for the illustrations, paintings and murals on walls he created on the streets of downtown Athens. His latest work is based on the composition of painting and photography and is mostly about memory and trauma. The works result from a procedure of quoting and cancelling different images, that are combined in order to create a large collage.

Chrysanthi Koumianaki is interested in public and private spaces in the metropolitan centres where she temporarily lives and works. Specifically she is mostly interested in parks, which create changes at the personal time and space. The works shown here are based on images from parks depicting elements that exist in them, such as the landscape, memorials, pavillions and leisure time activities.

His work resists linear conventional narrative by offering several simultaneous narratives, fragments of stories which when combined appear incoherent. What emerges in most of his images is an endless struggle of power, a constant change of roles between superiority and submission, without ever knowing who is able to abuse and who is willing to be abused.

What matters is the fragile product of the confrontation of characters. The image captures a moment just before or immediately after an event that is unclear itself.