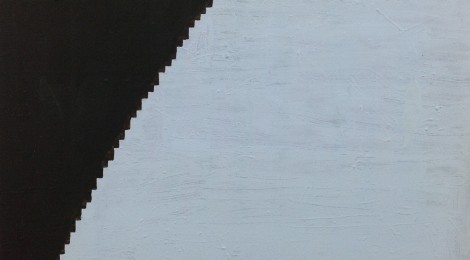 Ganis was born in Trikala, Greece in 1973. He studied at the Jerusalem Academy Bezalel and
has participated in solo and group exhibitions in Italy, Israel and Greece. Morris Ganis lives and works in Athens.

The exhibition entitled Herbaceous Border includes a series of paintings (oil on canvas) with references to Twitter, the architecture of the gardens in the Victorian era and the constellation Canis Major. The paintings create the sense of a destructurised garden, resembling the external environment in the room of the gallery. The creation, development and organization of space through the intervention of the designer – user are the axes around which the works in the exhibition are interchanged.

Herbaceous borders – as they are known today – were first popularly used in gardens in the Victorian era. Hybridization and new imported plant species revolutionized the form of British gardens in the 18th and 19th centuries. Nowadays social media have invaded our lives.
In Twitter, information is built and distributed through several links but it is always bound by the user’s or the author’s intervention.

In both cases there is a common goal: the creation, development and organization of space through the intervention of the designer – user – author. According to Morris Ganis the concept of development is vast, therefore the artist attempts to look for it in the universe and specifically into the constellation Canis Major by isolating a portion of its curved surface generated by an optical focus. It is development that attaches to the creation of the area causing the mind to recreate a parallel reality in the exhibition space.

As the artist states: … the reality that is created on your computer screen is recreated in the gallery space in the same way with other elements.