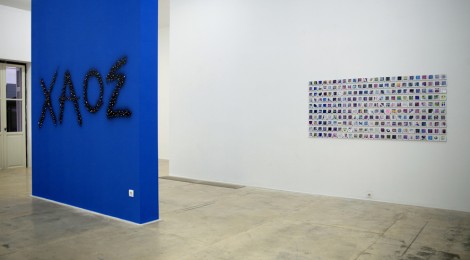 Limone was born in Marseille, France in 1958. His work has been shown in important galleries in France, Europe, USA and Japan. He currently lives and works in Paris.

Guy Limone attempts to combat the sense of chaos through his perfectly arranged works. He gives form to statistic information by observing our society, revealing its dysfunctions and providing alternative perspectives on how we perceive the world around us. His works are composed by tiny plastic figurines, that do not exceed two centimeters, and are adjusted onto a wall or other surfaces such as ceramics, aluminum rods, fishing lines etc.

As the viewer approaches the works it becomes clear that these figurines, depict men, women and children in different attitudes and various characteristics.

By using these miniatures for over 25 years in his art works Limone comes to the conclusion that contemporary global societies are managed through graphs, numbers and scores. He believes that the current ”crisis” confirms that universal communities are not interested in individual’s prosperity but in the mass of people.

Guy Limone on ”KAOS’‘: ” These figures are directly derived from the ancient Greek art. The ancient sculptures have lost their colors over time – Sometimes I paint the figurines white as a reference to that. The Greeks sculptors exacerbated the human form to a point that exceeded the natural range contary my figures are shrunk to the point of extinction. In all the thumbnails, the difference and the individualisation between the figures confirms the person’s mood to resist in order to escape from the mass. ”