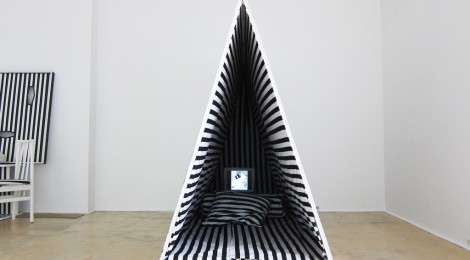 Angelo Plessas’ work was shown at the National Museum of Contemporary Art in Athens with the project ” The Angelo Foundation School of Music”.

He also participated in the 2nd and 3rd Athens Biennale, ”HEAVEN” (2009), ”MONODROME” (2011) and the 3rd Thessaloniki Biennale ”A ROCK AND A HARD PLACE” (2011). In 2011 he showed his work at the Triennale Museum in Milan and in 2009 he presented “the Angelo Foundation Headquarters” in collaboration with Andreas Angelidakis at the Jeu de Paume in Paris.

He was among the nine winners of The Rhizome Comission and owns a scholarship of the Fulbright Foundation. This upcoming June, Plessas, will be showing his work at Cell Projects in London.

He currently lives and works in Athens.

Angelo Plessas’ works are usually connected with the Internet. In 2007 Plessas creates the ”Angelo Foundation”, a fictional organization that aims to present new conceptual and semiological strategies and investigate the social life through the Internet and its adjustement to the reality through performances, installations etc.

The exhibition TEMPLE OF TRUTH is the most recent project of the ”Angelo Foundation”. The installation includes sculptures, flags with symbols and emblems, neon, websites, projections etc.

Plessas attempts to create a social environment that is surrounded by ideas and principles which are focused on human beings and their prosperity through aesthetic symbols. These ideas are supported by parallel actions, which are taking place during the show, whose aim is to convert the solitary activity of net surfing into a social experience. The concept of the exhibition is based on the Extropists’ philosophy which empowers progress and evolution of human values without the intervention of any religious principles. One part of their philosophy claims that the usage of the web and technology in general terms will redefine every human need.

According to the interaction of most of the works in the exhibition, both on physical and online space, the viewer is tempted to empirically explore the issues raised without interference and limitations caused by religion, race, sex, age and socioeconomic status.

During the exhibition spontaneous or predesigned workshops, events, happenings will take place at the gallery. Please follow updates through the gallery’s website www.rebeccacamhi.com and its Facebook page.