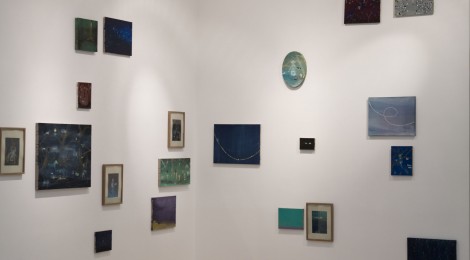 Konstantin Kakanias was born in Athens in 1961 and studied in Studio Bercot’s of Paris School of Fashion, when he started his international career in fashion design world, passing in magazine illustrations such as the New York Times insert and soon after in the field of Arts. He has exhibited in well established galleries in both United States and Europe, while he has published three books based on his heroin: Ms. Tependris.

The exhibition entitled ” Daniel “ is his third show at Rebecca Camhi Gallery.

The show is about meaning of failure in contrast to the obsession of success and wealth that characterize the modern world. According to Konstantin Kakanias the meaning of success is imposed violently from the childhood and may be the cause of society’s current state.

In contrast with that trend, Kakanias presents a series of paintings, created for the joy of painting while attempting to quest for the inner beauty.

The show is dedicated to Daniel, whom Konstantin Kakanias has met twenty six years ago. Daniel was a man that never judged others. Konstantin Kakanias worked for many years in his attempt to present Daniel’ s peacefulness and line of thinking through these paintings that were never exhibited before.